Tips to Recognize, Prevent, or Reduce Cyberattacks and Cybercrimes

As we move through the holiday season, new challenges that people and organizations face include the heightened risk and probability of “bad actors”–people with criminal intention, organized crime groups, and state-sponsored groups–seeking to compromise people and organizations’ mobile phones,… Read More: https://acl.gov/news-and-events/acl-blog/tips-recognize-prevent-or-reduce-cyberattacks-and-cybercrimes

Elder financial abuse is a growing concern among seniors and their adult children. Sometimes family members and caretakers are the culprits. Just one financial scam can cost the average senior about $30,000 — a big hit for any nest egg. So how can you protect your parents' finances? Here are five ways to help.   http://www.nbcnews.com/business/retirement/worried-about-elder-financial-abuse-how-protect-your-parents-n559151

Phone Scams Against the Elderly

The Senate Special Committee on Aging held a hearing on the increase in the number of unwanted telephone calls, often pressure-laden scams, targeting the elderly. These types of calls had increased, despite the enactment of laws allowing consumers to opt out of unsolicited telephone marketing calls. http://www.c-span.org/video/?326507-1/hearing-unwanted-telephone-calls-scams

Mariana Cooper, 86,with her granddaughter, Amy Lecoq, 39. Ms. Cooper was bilked out of much of her savings by someone she considered a friend. Credit Ruth Fremson/The New York Times With 10,000 people turning 65 every day for the next decade, a growing pool of retirees are susceptible to such exploitation. As many as one in 20 older adults said they were financially mistreated in the recent past, according to a study financed by the Justice Department.

What Banks Are Doing to Halt Elder Abuse

An increasing number of banks and credit unions are implementing fraud-prevention initiatives to prepare for the onslaught of aging Americans expected to developAlzheimer’s disease. They are training tellers “to flag potential suspicious behavior, such as coercion by family members, frequent withdrawals of large sums of money in a short period of time or transferring large sums of money,” said Ramsay Alwin, vice president of economic security

Older adults, primarily victimized by their adult children or grandchildren and often frail with some kind of cognitive impairment, can make terrible witnesses. It’s those same factors that make them such vulnerable prey. Elder abuse victims often enter the shelter in crisis, with just the clothes on their back, no money and no access to their financial information. Some become long-term residents, finding friendship, romance, love; some are reunited

New PASS IT ON campaign 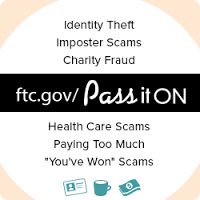 The Federal Trade Commission works to prevent fraudulent, deceptive and unfair business practices in the marketplace.  Their new campaign is Pass It On.  The goal of the Pass It On campaign is to empower older adults to share information about fraud and scams with their family and peers.   http://www.consumer.ftc.gov/features/feature-0030-pass-it-on